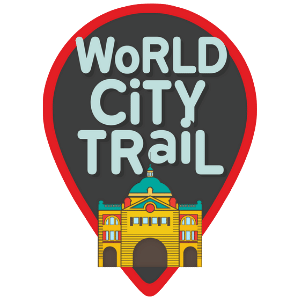 Please visit this link to purchase this product

Melbourne treasure hunt was created to offer you the best way to explore an amazing city.

Melbourne is a blend of bustling laneways, great restaurants and amazing museums.

There’s always a sense of excitement here – whether its in the city’s fascinating flavours or fierce sporting rivalries.

Attend a sports event, drink a cocktail on a rooftop and uncover the stories hidden within Melbourne’s art-filled alleyways.

Our game is a nice way to explore the most important attractions of Melbourne solving riddles and learning interesting info about the city.

Explore Melbourne, playing our treasure hunt and city tour with your smartphone!

Melbourne scavenger hunt is a really fun and unique activity for the riddle lovers!

St Paul’s Cathedral is an Anglican cathedral in Melbourne.

Designed by the English Gothic Revival architect William Butterfield and completed in 1891, except for the spires which were built to a different design from 1926 to 1932. It is one of Melbourne’s major architectural landmarks. The plan of St Paul’s is a traditional Latin cross, with a long nave, side aisles, short transepts, a tower at the crossing, with choir below, sanctuary and altar beyond, and a pair of towers framing the ceremonial main entrance.

Melbourne Town Hall is the central city town hall of Melbourne, and is a historic building in the state of Victoria . It is located in the central business district on the northeast corner of the intersection between Swanston and Collins Street, it is the seat of the local municipality of the City of Melbourne, and has been used for multiple purposes such as concerts, theatrical plays and exhibitions.

The State Library Victoria is the main library of the Australian state of Victoria. It is located in Melbourne, it was established in 1854 as the Melbourne Public Library, making it Australia’s oldest public library and one of the first free libraries in the world. It is also Australia’s busiest library and, as of 2018, the fourth most-visited library in the world. The architecture is influenced by the ancient Greece.

The Queen Victoria Market ( Vic Market ) is a major landmark in the central business district of Melbourne. Covering over seven hectares (17 acres), it is the largest open air market in the Southern Hemisphere.

Constructed in stages from the 1860s and officially opened in 1878, the Queen Victoria Market is the last remaining major market in the CBD, and along with Prahran Market and South Melbourne Market, the last of the city’s Victorian era markets still operating. It is listed on both the Victorian Heritage Register and the National Heritage List, and is one of Melbourne’s major tourist sites, attracting approximately 10 million visitors annually. Have a taste of Melbourne ,visiting this market!

Please visit this link to purchase this product

Only logged in customers who have purchased this product may leave a review.