Online app (data on) for iOS, android and more

Offline (downloadable) only for android

Perth treasure hunt and city tour was created to offer you the best way to explore an amazing city.

3000 hours of sunshine a year, friendly people, lots of attractions and great food !

Visit over 1500 species of animals at the Perth Zoo and have a great walk and explore the city center.

Our game is a nice way to explore the city’s most important attractions playing and learning!

Explore Perth, playing our treasure hunt and city tour with your smartphone!

Perth scavenger hunt is a really fun and unique activity for the riddle lovers! 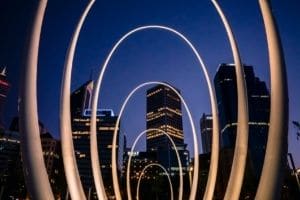 Spanda is a public art work made of carbon fibre and designed by Australian born artist Christian de Vietri. It is located at Elizabeth Quay . It was installed in January 2016. The sculpture is elegant, abstract, and minimalist, giving the impression of an ever-expanding vibrational pattern. It has been described as a celebration of the “union of the individual with the universal”.

The Swan Bells are a set of 18 bells hanging in a specially built 82.5-metre-high (271 ft) copper and glass campanile in Perth. The tower is commonly known as The Bell Tower or the Swan Bell Tower.

Taking their name from the Swan River, which their tower overlooks, and forming a sixteen-bell peal with two extra chromatic notes, they are the second largest set of change ringing bells in the world. 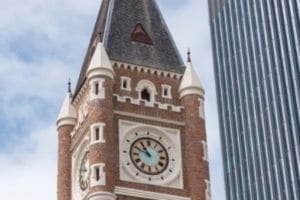 The Perth Mint is Australia’s official bullion mint and wholly owned by the Government of Western Australia. Established on 20 June 1899, two years before Australia’s Federation in 1901, The Perth Mint was the last of three Australian colonial branches of the United Kingdom’s Royal Mint intended to refine gold from the gold rushes and to mint gold sovereigns and half-sovereigns for the British Empire. Along with the Royal Australian Mint, which produces coins of the Australian dollar for circulation, The Perth Mint is the older of the two mints issuing coins that are legal tender in Australia. 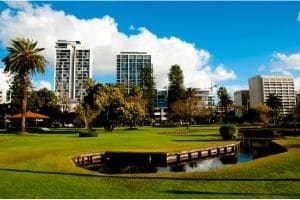 Queens Gardens, Perth, is a 3.3-hectare park on a former brickworks and clay pit site in the eastern end of the Perth central business district. The park is bounded by Hay Street to the south, Plain Street to the west, Nelson Crescent to the north, and Hale Street to the east, which separates it from the WACA Ground. A great park to explore and have a great and peacefull walk!